This month my latest book 'out there' My One True North is on special offer on Amazon.com for readers in the United States - it's only $1.99 so please grab it while you can. 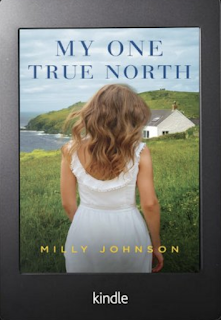 My One True North came out in what should have been the biggest year of my career. Just before the world went bonkers, I'd been awarded the Romantic Novelist Association's Outstanding Achievement Award which lifted me from the most severe depression I've ever had following the death of my father. I can honestly say when I was doing the speech, all I heard was a pin drop silence that I took for boredom and at one point I can been seen flicking through the speech to see if there was any way of cutting to the end. I wasn't prepared for the reception, I was humbled by it. Many people have presumed that My One True North was written when I was grieving dad. The story is, after all, about traversing the cold lake of grief - easy assumption. But quite the opposite is true, it was written before dad was even ill. I found myself stepping in the footsteps of my characters, having to pick something for dad to wear to meet his maker (I can't tell you how long I laboured over his socks). It was life imitating art and my only consolation is that I got it right, I got it on point what a truck travelling at 100mph to the head grief can be. But it was never my intention that it was a miserable book - on the contrary. If you tackle something as heavy and dark as the loss of a partner, then you need lots of humour and lightness whipped into the mix. And as I was writing the book, I was aware that it fell quite naturally into four stages: the lowest point, a dawning of light on the horizon, an autumnal breeze of change blowing out the old so that new life had clear passage to grow - and finally an upward surge. It was like four points of the compass: South, East, West, North - in this case 'The Northern Lights'. North featured heavily, not the least because that's where I come from. But the true north... the idea of fate interfering, overriding circumstance to put people together - for them to find their true north in each other.
Some have commented that there was no epilogue with this book. (Funny because if you do write an epilogue, some people complain that you've spoon fed them conclusions they were grown up to reach themselves, thank you... you can't win!) I will continue to write epilogues if needs be, but in case you're asking, there's no epilogue in this one because when I tried to write one, it felt as if I had left the characters where they should be and must leave it there because anything else would work against it. It didn't feel right to add anything else, it ended when it ended and in my head it was the perfect point to say goodbye with a spectacular scenic finish.
I was lucky that I managed to have a hardback launch for this book before lockdown, where so many of my friends didn't manage it for their books out later. I was lucky that the supermarkets, who had cut down on their books offering, took mine by the thousands and it stormed the charts and stayed in them for weeks - my longest 'tail'. I felt privileged to have more letters than ever before that this book about two people grieving their partners who find friendship with each other and a motley group of people travelling in the same grief boat, gave respite to worried minds, took people away from the mess happening in the world. Books can work with the tide or against it, and the trouble is we never know when or in which direction those tides are going to flow so there is alchemy at work with book success. A book with a sad beginning could have floundered in a climate where people were looking for jollity, but mine didn't. The tide worked in my favour. This job is often about luck as well as hard work.
I should have been in a radio studio with Graham Norton to advertise the paperback, I should have been at parties and touring and readings and celebrating the biggest book of my career... but instead I had to sit in my office and connect to people via Facebook Live. It became a weekly event - just me and a cup of tea and a bun, talking about all sorts of very little news but somehow that worked too. It gave people a sense of connection. That for an hour each week, we were all pals in a virtual front room, chatting about the little things not the great big elephant in the room as, for that hour, it had been banished to the shed. I enjoyed all those sessions. I enjoyed writing jokes and making them into mini videos and posting them 'The Daily Jolly' I called them. As authors we have to keep the plates spinning, we have to keep saying 'Please buy my book, this is my job, I have a mortgage' and we had to invent other ways of spreading the news about books we had worked on for the best part of a year. We couldn't afford for them to be pushed out into the sea only to sink like a boat with a hole in the bottom. 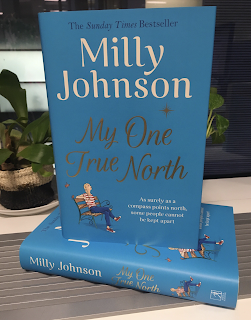 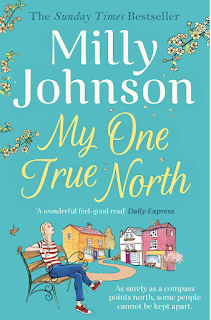 And I had to put my creative head on and write the book that I'm about to bring out in just under seven weeks now. I Wish It Could Be Christmas Every Day (across social media as #ChristmasEveryDay) WAS written just after dad's passing, unlike My One True North.
Timing is everything and this book wasn't the one it was originally meant to be. I've had the title in my head for years. It was originally going to be a sort of Brigadoon where people find themselves in a place where it is Christmas every day, literally. But I couldn't make that work. Had I written it weeks later, when the pandemic hit, it wouldn't have been the book it is today either - because the idea of setting a story in a place where people are effectively locked down, would have been the last thing on my mind. 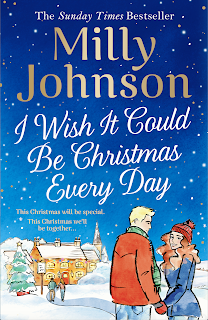 I wrote the first draft in less than three weeks flat. I didn't want to talk to anyone in the new year, I just wanted to write. I immersed myself in a world of snow and let my brain guide my hand hoping it would come up with the goods. And it did. And whereas My One True North has a big cast, big scenes, lots of action, this one has a stripped back crew and one location. And I think it's the best thing I've ever written because of the emotional punch, no doubt dredged from me because of what was going on in my own life. I needed to give myself some hope and redemption with this book. I needed friendship and romance and kindness and resolution. I needed to work a lot of stuff out of me via my characters - writing really is the best sort of therapy. And I can't wait for this one to come out. Even though I won't be having my launch parties and my signings, I hope this one drops into shopping baskets everywhere and people find, within its pages, exactly what they need to find in these times... that it doesn't take much to have fun, that life is here and now and we need to enjoy it in the moment and not put everything on hold until times are better. That it is people who count more than things. And that snowmen poo marshmallows.
This is the story of six people.
Bridge and Luke who have been battling for five years to end their marriage. They've both moved on and found a way to part via a no fault divorce. All they have to do is meet, sign a piece of paper each, swap them and be on their way - never crossing paths again. But an unforecasted bout of snow means they have to take refuge in an old inn on the North Yorkshire moors and spend far more time with each other than they'd planned. Plenty of time for dangerously cosy memories to rise up and engulf them.
Mary is the 'invisible' PA to Jack Butterly, owner of the hugely successful Butterly's Scones, a man who Mary has been secretly in love with for four years. She has volunteered to drive Jack to a country house hotel where they will spend the night before the next day's early morning meeting, knowing this is the best chance she will ever have of getting Jack to see her outside the job.  But the snow alters their plans and they too are forced to hole up in the Figgy Hollow Inn. What happens when Jack sees this capable young woman through the eyes of others?
And Robin and his husband Charlie are on their way to spend a five star Christmas in a top Aviemore hotel when they too have to seek refuge in the inn and forsake their water bed and seven course Christmas dinner cooked by a Michelin-starred chef. It's a disaster... or maybe they find everything they were most chasing with new friends and a log fire instead.
I think out of all the characters I've ever created, these are my favourites. They became so real, so rounded, I loved them. I loved watching their friendships grow, I loved writing their energy and laughter and banter. I even loved eating their food.
This horrible, awful, sad year has spawned a book I'm so proud of. I hope you take it to your hearts and it gives you pleasure, fun and respite. And with equal starring roles to the human cast are diamonds, scones, broccoli, tins of tomatoes, snowmen, Christmas crackers jokes (of course!) stockings, carols, radios... and an awful lot of food. The only thing missing is Rudolf. And I'm really annoyed at myself that I forgot to shove him in somewhere!
Enjoy! xxx
Posted by Milly at 13:17
Email ThisBlogThis!Share to TwitterShare to FacebookShare to Pinterest