Girl on My Brain!!

If you haven't heard of 'The Girl on the Train' you must have been in outer space with no internet or in a coma for the past year.  I have been neither and I am being haunted by it.
The cover... 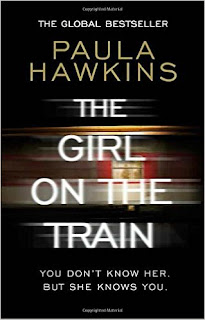 is seared onto my retinas.  When I close my eyes at night to sleep, any image I conjure up to help me drift off has those speed blurs fading off to the right.

The book is everywhere.  When I go ANYWHERE, posters bark at me from the walls.  When I go to the supermarket to buy my bottle of Hardys, the book is there at every turn.  Advertisements in magazines, Facebook/Twitter... and even our trade magazine, The Bookseller has become 'The Paula Hawkins Fan Mag'.  Every page gloats... look ' The Girl on the Train has knocked unknockable David Walliams into second place.  It's even trounced all over JK Rowling.  Which human being does that, FFS?  None, because it is INhuman.  Especially for a debut crime writer.  Did I say FFS?  I'll say it again then.  I see spin-offs... GOTT the musical in the West End, GOTT wine bottles served on British Rail.  If any country hasn't bought it to translate, it soon will. I hear publishers on Pluto are in a bidding war with those on Mercury for it.

What is more Paula Hawkins has the same agent as me.  If Lizzy Kremer had not been such a great 'mother', I might have felt like the older sister who was more gauche, stupid, ugly, unsuccessful than my younger sibling who grabbed all the trophies for best arabesque in ballet classes, Head Girl award, Girl most likely to become God trophy...  I have told 'my mother' that when my book comes out in 3 weeks time, I'd like her to kindly remove my younger sister's name from the top of the Sunday Times bestseller charts and give me a fighting chance. No wonder LK has just been voted Agent of the Year... she is up there on the top table of the success story of the year/decade/epoque.

The Train Girl is not Paula's first book.  She was a jobbing romcom writer of 4 books then changed genre to crime at a time when the world seems extra thirsty for it.  She produced one of those rare books that gives readers something they haven't had before... an extra-flawed heroine who self-medicates booze to help her get over the fact that her ex has moved onwards and upwards.  She lies, she blacks out, she does everything she has promised herself she won't. A heroine who is almost an anti-heroine?  Is that allowed?  Is it now.

Just when you think you have seen everything... some clever sod produces something new.  And I love it.  Where would any budding entrepreneur be without that chance to grab the world by the throat?  The Holy Grail has been replicated and there are loads of them out there waiting to be found!  Never let anyone tell you that the impossible is not possible.

You can tell how successful a book is by how many Amazon reviews there are.  (I don't mention Goodreads.  It's a horrible bitch-fest of a site... most of those reviews are written by people they breed on special farms).  GOTT has about 12 million (slight exaggeration) comments.  Not all of them good because success attracts green-eyed vitriol.  One famous writer told me that if ever I get depressed about a crap review I've had, pick a book I love - a masterpiece - and see what reviews it has been given.  How can anyone not say that Jane Eyre should be on a pedestal?  Well... there's always an undiscovered genius pointing out 'unbelievable coincidences' (it is fiction, mate) and how lacking it is compared to Wuthering Heights.  Then again, check out the slagging off of Thomas Hardy, Emily Bronte, Jane Austen... Dan Brown comes in for a fair amount of stick about how 'rubbish' his writing is (a book I devoured like a giant 12 foot eclair) and EL James and JK Rowling have their knockers too.  I'm sure when they're working out how much monetary interest their book sales have earned them that day and how many 'ker-ching' sounds they've heard in the past half an hour, they spare a few moments to be totally gutted.

Paula's debut crime novel has been made into a film, it's a best seller in hardback, paperback, ebook, audio, braille, semaphore, Morse code... and the world is waiting for her next book which will no doubt be ripped from the shelves as soon as it is out.  I have no idea how Paula sleeps knowing that Mr X of Tunbridge Wells guessed how the entire plot was going to play out after reading 2 pages and has therefore awarded her novel one star.

Don't get me wrong - I'm doing okay.  I'm selling books, making a living... but the GOTT story is the stuff of dreams and all of us authors want it.  With those sales, I could buy a mansion, not moan at the kids when they go over their phone allowance, have my eyebrows microbladed every 6 weeks,  buy that Lulu Guinness handbag without having to wait for the 20% off sale.  And - oh - to sit in a cinema with all my pals watching MY story on a massive screen (sitting next to Hugh Jackman, who was the love interest obviously) and having first pick of the Cornetto flavours when the ice-cream lady comes around in the half-time 'comfort break' well... it's something to aim for.  And it could be mine... there is no reason to give up hope because it hasn't happened so far.  I just need the zeitgeist to pick me up in its teeth and lift me on its thermal.  A zeitgeist that recognises Yorkshire romcoms are the new black.

Flippancy apart, the real message of this post is that the fairytale does sometimes still occur.  And though fledgling writers should remember that though this is the exception rather than the rule... it CAN happen to any scribe.  No doubt Paula was disillusioned when she was writing her romcoms and ready for giving up because she wrote GOTT when she was skint.  I bet she wouldn't have realised the monster (though nice friendly author-loving monster) she released when she sent off her book to MOTHER and said 'Okay then, what about this one instead? Is it a goer?'

Fellow authors might wish PH's story was theirs, but as well as, not instead of  her success (there is a difference) because we're a sisterhood, a band of writers who protect other writers because they're OURS and represent books and enjoyment of stories and keeping the industry alive and everything we stand for.  Writers are a good bunch, rivals and yet we manage to remain bezzies as well.  We've seen another of us projected into the stratosphere with Jojo Moyes and her 'Me before You' which has just been made into a Hollywood film.  Shit happens - but so does Sparkle/Glitter... or whatever the flip side to crap is.   There are latent Cinderellas in our midst and we will rejoice with them, when the fairy godmother shakes that wand and the pumpkins start twitching.  It shows us all that there is still a massive passion for stories in the world.  That sort of news is very, very welcome to authors.  A mild shade of green on the cheeks is permitted though, we are only flesh and blood.

Meanwhile, I'm just started my new novel... 'the Woman on the Plane'.  Mr Spielberg, PM me if you think we should talk...

Milly Johnson was not paid for this article.  No shit Sherlock.

Posted by Milly at 16:19
Email ThisBlogThis!Share to TwitterShare to FacebookShare to Pinterest